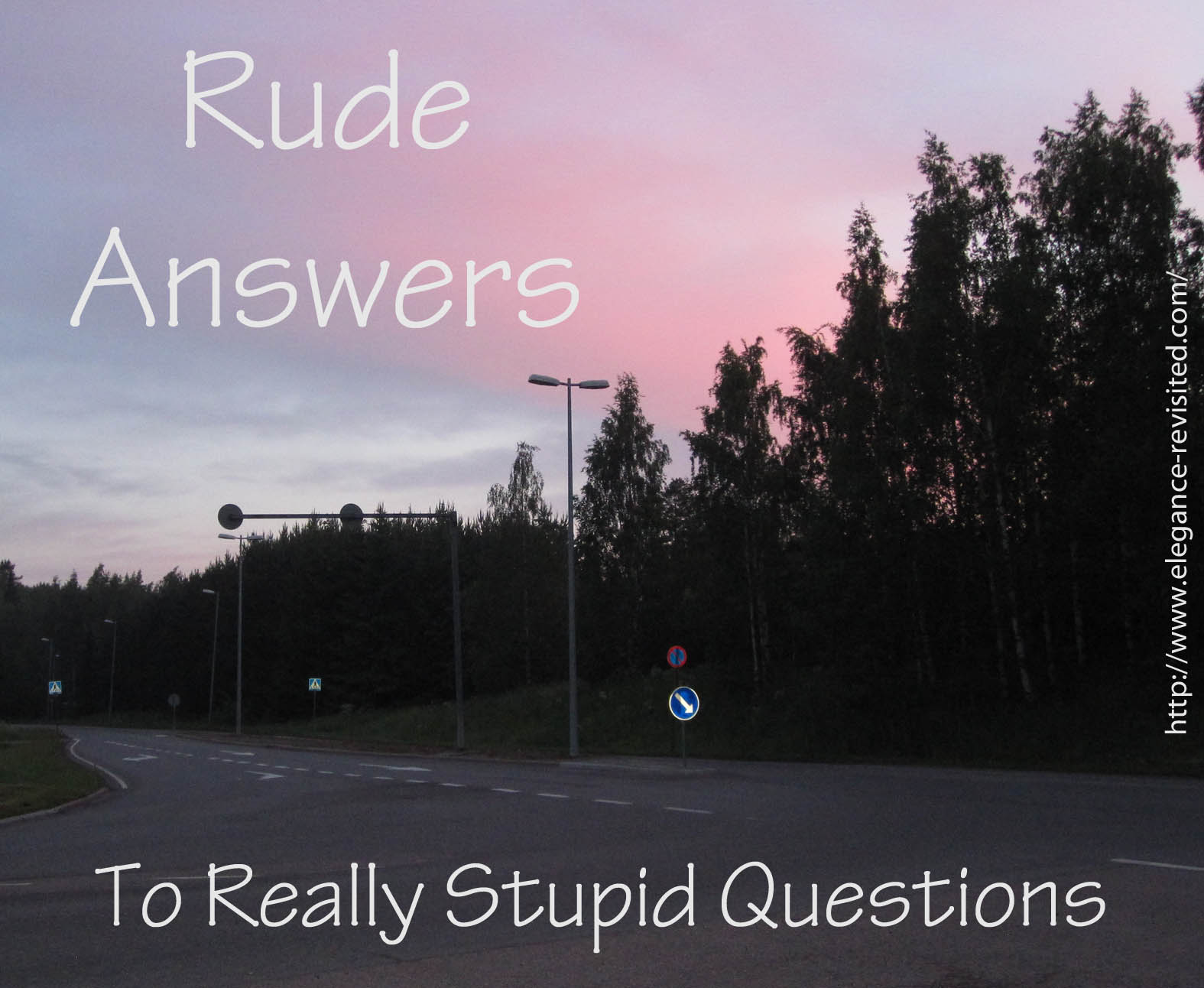 Even though I live and work in a multi-cultural setting, I’ve never considered myself particularly well-travelled or well-informed when it comes to other cultures. Of course, I think I am at least superficially aware of the particular characteristics of most (western and some eastern) countries / cultures, having learned some more or less useful facts at school.

However, time after time I realise that most people I meet on my travels are far less familiar with my native country and culture than I am of theirs. To some extent it is understandable: Finland is of course a relatively small country that few people are interested in or have visited (and those who have tend to be very knowledgeable).

(WARNING: READER DISCRETION IS ADVISED: Although it is not my intention to offend anyone, you might want to look up sarcasm in a dictionary. If you are familiar with the concept, keep reading…)

Yet, there are certain rather absurd ideas and misconceptions that keep popping up in conversations, and the more often I hear them, the more frustrated I get. I mean, it’s easy to be patient and understanding when you hear a really ridiculous statement or a question once, twice, or even fifteen times… but there comes a point you feel that enough is enough… For instance, when I first meet someone, and their opening line is something like: “Oh Finland, very cold…” I have to bite my lip not to say how stupid that sounds. Now, try this: “Oh, Canada, very cold…” Yeah, it sounds stupid, doesn’t it? (BTW: winter is a lot colder in some parts of Canada than in Finland…). Oh, and before you ask: the closest I’ve ever come to a reindeer was on a plate in a restaurant…

So, I’ve collected here a few phrases I’m really, really tired of hearing, as well as my tongue-in-cheek answers, i.e. what I would actually want to say when I hear them (but usually won’t…)

THE REALLY STUPID THINGS YOU SHOULD NEVER SAY TO A FINN:

Yes, in a galaxy far, far away… the outer reaches of Europe… There is this brand
new invention, called a plane, it can take you there in less than 3 hours, isn’t that amazing?

“Do you think Finland will join the EU soon?”

Huh? Didn’t you get the memo? The one we sent…oh… twenty years ago???

“It’s so dark in winter. How can you stand it?”

Well, we’re a bit funny about daylight here in the North: we like to save it all

for summer when it’s warm and we’re on holiday so we can enjoy it.

“How can you be cold? You’re a Finn, you should be used to cold.”

Yes, I am. I also expect to escape the cold when I go indoors…

“What do you do when it snows?”

Well, first the president declares a national emergency, then we loot
the shops for supplies and hide in the basement until April…

3. ABOUT HOW WE’RE SUCH STRANGE CREATURES

Yeah, imagine that: we look just like you. That’s because we like to hide in plain sight…

“Is it because of the climate that Finns don’t talk much?”

Must be. I mean, take the Swedes, for example: they never stop talking, and it’s not as if they have something to say, it’s just this endless chit chat. They just talk, talk talk, till your ears fall off, or you want to strangle them… Wait, don’t they have the same climate???

“How do you play football in the snow?”

We don’t give a shit about football, real men (and women) play ice hockey.

“Finnish is such a difficult language.”

How long did you study Finnish? Oh, you didn’t? Then how do you know if it’s difficult or not?

Actually, according to the pyramide model, English is… insert baffling linguistic terminology… blaah blaah… second language acquisition… blaah blaah.. Finnish…. inverted pyramid… blaah blaah… are you falling asleep or is that a look of sheer horror in your eyes?

“So, if you speak Finnish, you can understand Swedish and Danish, too, right?”

Oh, you know, as an English / French / Italian / Whatever speaker you can automatically understand Chinese, right? It’s the same thing…

No, because Finnish is a Finno-Ugric language whereas Swedish, Danish and English (French, German, Dutch, Spanish, Italian etc) are Indo-European languages… [insert a baffling amount of linguistic terminology here]…protolanguage….blaah blaah… language tree…blaah blaah…  more baffling terminology….and the conclusion of this exhaustive introduction to linguistics is that Finnish is as closely related to Swedish / English / Japanese as elephants are to oranges.

Well, the same way English is similar to Russian… It isn’t? You’re sure? Oh yes, it’s because…[insert more baffling linguistic terminology]… Russian is of course a Slavic language… blaah blaah… Finnish is a Finno-Ugric language… just like sharks and eagles are both animals.

So, there you have it: a few phrases that probably most Finns are sick of hearing. We don’t expect you to know our native country or culture (we are, after all, realists and pragmatists), but you should be warned that we are also sarcastic and find it very difficult to not make fun of people who ask stupid questions…

Have you encountered funny, frustrating or infuriating

misconceptions of your native country or culture?