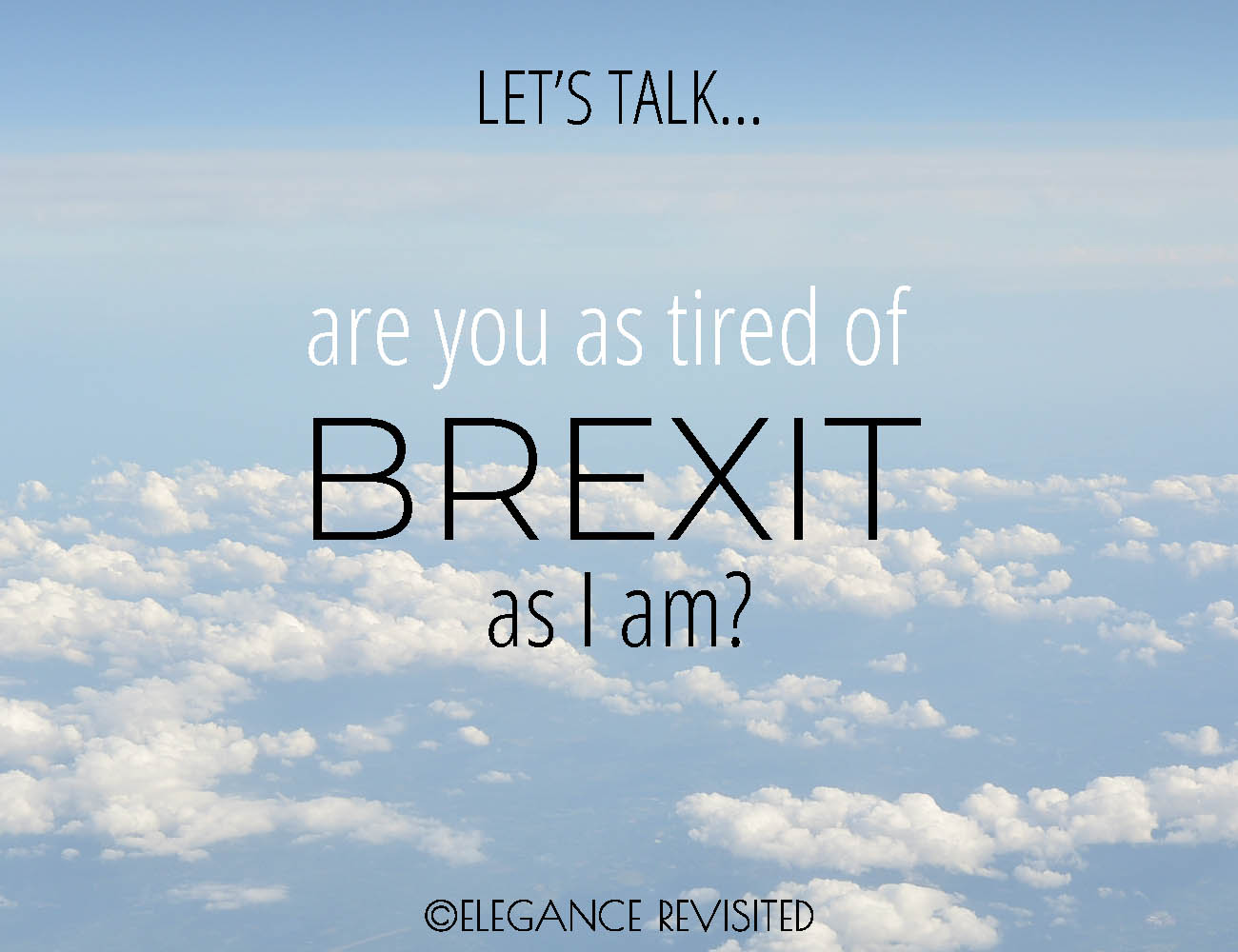 I was in Brexitania last weekend

You know, the country that insists on shooting itself in the foot, then blames its neighbours.

Or maybe it should be called Little England (because the leaders of the said country couldn’t care less about how people in Northern Ireland and Scotland feel about Brexit). No, I think I like Brexitania better. That’s what I’m going to call it from now on.

So, why was I in Brexitania, then?

Again? Isn’t this like the third (or fourth, who’s counting) time this year?

OK, if you’re new to this blog, here’s the short version: my husband, Professor M, works in Brexitania, and we have a second home there. And because we want to spend weekends together, one of us has to travel, and this time it was me.

I used to enjoy these weekend trips to Brexitania. Of course, that was before it became known as Brexitania; when it was still a normal country. You know, when they still had some more or less sane (or at last not completely insane) politicians, and nice, ordinary people didn’t blame everything on ‘foreigners’, ‘Europeans’, or ‘immigrants’ (i.e. people like me and my husband).

But since the country collectively took leave of its senses almost three years ago, it’s been like watching a big red bus (covered in inane slogans) hurtling towards a concrete wall, in slow motion. Trust me, it’s not pretty.

As you must have figured out by now, this is my Brexit update. So, if you’re not interested, just skip it; there will be an outfit post on Sunday…

Right, back to the impending slow-mo-big-red-bus crash…

So far, every twist and turn of this saga has been boringly predictable and completely avoidable. Yet, the big red bus stays on its chosen course, intent on hitting that wall. Never mind that the unwilling passengers at the back of the bus keep asking the driver to slow down or stop, or that  passers-by hold up signs warning that hitting a concrete wall is not a good idea. The passengers at the front of the bus are so busy fighting over who gets to drive next that they refuse to pay any attention to warnings (whether from inside the bus or outside it). And like the rest of the world – outside Brexitania, that is – I’m getting bored with the whole thing.

Because you can only watch a self-inflicted slow-mo car crash for so long. At first it’s oddly fascinating, in a creepy sort of way: you can’t believe what you’re seeing, and keep expecting the driver to hit the brakes to avoid collision. But then you get a chronic whiplash from constantly rolling your eyes and realise ‘I told you so‘ has become your standard answer to any question. So, to maintain your own sanity, you just stop giving a damn and move on.

So, what will happen next?

Who knows. Who cares. I’m not sure I do, anymore. I just want it to be over, one way or another. It’s not like I’m personally affected. Well, I am, sort of, because my darling husband is one of the 3 million EU citizens held hostage by a hostile, quasi-totalitarian regime in Brexitania. And yes, my choice of words is deliberate here.

The only thing that is certain is that the supreme leader of the regime is adamant that under no circumstances should Brexitanian citizens get to vote on whether they want the proposed deal, no deal, or no Brexit. Only the parliament gets to vote until the result satisfies the supreme leader. And the vassal states under Brexitanian rule (you know, the pesky independent-minded Scots and rebellious Irish) should just stop whining because the supreme leader has no time for the insignificant worries of the little people. After all, she is in the middle of a Machiavellian power struggle and trying to prevent her power-hungry rivals from stabbing her in the back, or worse, to oust her as the supreme leader. And nothing is more important than keeping her position…

Meanwhile in the EU, the leaders of 27 nations are getting increasingly tired of the whole fiasco. Let’s face it, by now everyone is bored out of their heads by Brexit and the Brexitanians who still don’t have the faintest clue as to what they want. And with the elections looming (yes, MEPs are actually elected, by the citizens of their respective countries), they would very much like to get back to business as usual. You know, sorting out problems that actually can be sorted out. So, the EU is beginning to feel that it doesn’t really matter how Brexitania leaves the block, as long as they do. The sooner the better. ‘Adios amigos, it was great while it lasted, bye-bye and good riddance; now, let’s get back to the real world’, that sort of thing.

It’s obvious that I don’t enjoy these trips to Brexitania these days.

Yet, I still keep going back. But only because I want to see my husband (who, as you recall, is not from Brexitania but only works there). However, while I’m there, I find it too stressful trying to meet new people (because they might turn out to be brextremists, and I think it’s pointless trying to talk to zealots of any variety), so I mainly keep to myself.

And yes, I know there are a lot of nice, decent people still out there. But they’re doing a very good job hiding. I was very eager to find them, the first year or so, but I’ve given up now. I just don’t have the energy. So, if you’re one of those elusive nice, sane people, give me a sign of life so that I know you’re not just a figment of my imagination (or wishful thinking).

What’s been frustrating you lately?

Not Dead Yet Style, Elegantly Dressed and Stylish, High Latitude Style, Style Elixir, A Labour of Life, Curly Crafty Mom, Fashion Should Be Fun, Color and Grace, The Wardrobe Stylist, Not Dressed As Lamb, Style Nudge, Living on Cloud Nine, A Well Styled Life, Elegance and Mommyhood. Posh Classy Mom, Nancy’s Fashion Style, Shelbee on the Edge, A Pocketful of Polka Dots Style Splash, The Fashionista Momma, Tina’s Pink Friday, Away from the Blue, Mummabstylish , Mutton Years Style and I