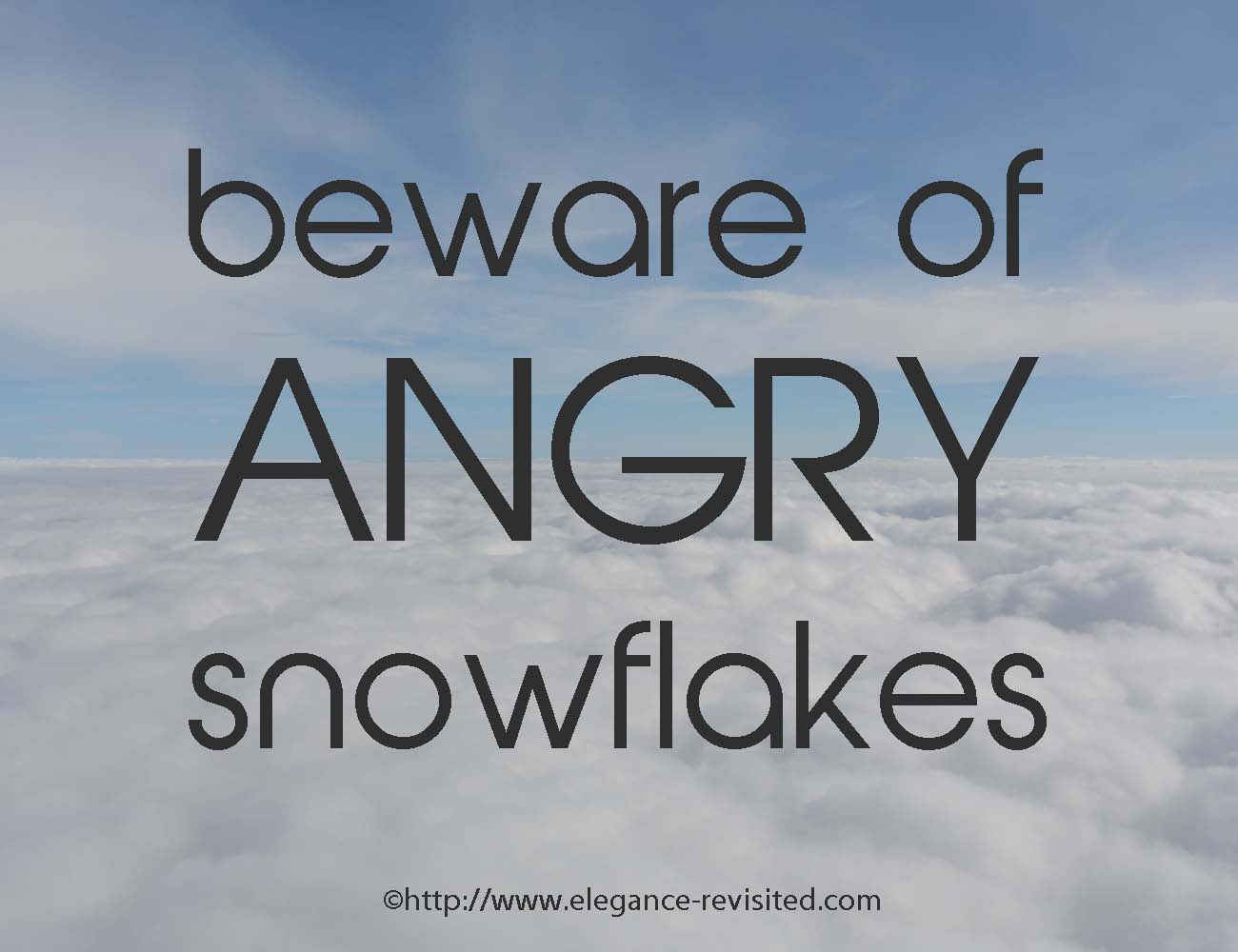 Remember the time this term referred to spoiled, entitled brats throwing a hissy fit when they didn’t get what they wanted?

Recently, it has become the all-purpose insult that characterises 2016, quite carelessly thrown at anyone who expresses disgust at the racism, xenophobia and misogyny that define the current wave of conservative / populist politics.

Of course, terms like these don’t exist in a vacuum, but are used to further a political agenda. In this particular case, ‘snowflake‘ is used as a derogatory term for someone who points out obvious bias and prejudice in populist right-wing rhetoric. And because the term is an insult, its function is to diminish the person it is aimed at and trivialise their arguments as over-sensitivity. Thus, ‘snowflakes‘ are supposedly people who ‘get their feelings hurt’ when they are targets of cyberbullying or online abuse, or ‘whingers’ who refuse to understand that in the populist newspeak democracy simply means extremist mob rule and freedom of speech is limited to ideas the alt-right Thought Police want to promote. Well, I guess it shouldn’t come as a surprise that the extreme right fashions its own version of political correctness to intimidate  and silence all dissidents…

The term ‘snowflake‘ is also used to refer to young adults of today, the Millennials. The 20-somethings, often called the ‘Generation Snowflake‘, who are supposedly so fragile and entitled that they need ‘safe spaces’ to escape anything that goes against their personal beliefs. You know who I’m talking about: they (and their parents) expect the whole world to tiptoe around them in order not to upset them. They speak political correctness as their native language, and find any criticism an attack on their values.

But they also have a heightened awareness of social justice and an earnest desire for fairness. They don’t just pay lipservice to ideals such as equality and tolerance, but make them a fundamental part of their daily lives. And it is in this keen eye to spot intolerance and injustice that I’m counting on to challenge today’s conservative / populist hate culture. That is, if Generation Snowflake can shed the self-styled ‘I’m victimised by life‘ identity they carry around like a security blanket…

And what would I want to say to the snowflakes of the world (whatever age they are), to help them face the challenges ahead? Hmm… This isn’t easy. Trying to be gentle, I mean; snowflakes are so easily crushed, and I don’t do political correctness… OK, how about this:

You are not alone. No, I’m not going to give you a hug and tell you you’re special. Because you’re not. There is nothing unique about you, and if you just pulled your head out of your [insert a less offending term for the body part in question here], you would realise that there are millions of others just like you. That’s not a bad thing. Look how many friends you have! Imagine what you can do if you just stick together!

But first you need to toughen up a bit. You know, grow a thicker skin. Learn to talk back. No, not whining how victimised you feel because there are nasty people in the world. And don’t even think of retreating into some cosy little bubble of a ‘safe space’ for a whine-fest with your newfound flurry of friends! You know what happens to snowflakes in warm and fuzzy safe spaces? They turn into slush. You don’t want that, do you?

No, I want all you fragile little snowflakes to get angry and create one hell of a blizzard. Yes, I said angry. Not depressed and self-destructive; I want you to project that anger outwards, into the world. No, I’m not inciting violence here; I’m simply saying it’s time to stop being a good girl. Good girls never get anywhere. Angry bitches do.

OK, fine, I get it, it’s not your style… Listen, sweetie, the nasty people in the world don’t give a shit about your feelings, and they don’t speak ‘nice‘ either. So, stop whimpering and start organising. It’s your turn to change the world. What? Of course you can do it! Generations of young people have been there, maybe you can learn a little something from them. You could adopt the Baby Boomers‘ optimism, self-confidence and unwavering belief that they were destined to change the world. And the Generation X anger, resilience and self-reliance in the face of obstacles. It’s all there for you to take and use as you see fit. And trust me, you’ll need it to steer the world back on the correct course.

In the meantime, why don’t you get to know your new friends, see if you can all get together and get that blizzard started? Huh? I know you have it in you. But I must confess; I’m a teeny bit worried where the wind will take you… But I guess I just have to trust the highly-tuned socially aware inner compass of yours guiding you in the right direction.

the self-appointed strategist and spokesperson for Generation X

The writer is not, has never been, and will never be a snowflake. Instead, the writer is a typical deeply cynical member of Generation X: disillusioned and practically teflon-coated, and admits to working really hard to control her desire to roll her eyes whenever she hears a snowflake going on and on about how special and/or sensitive they are. However, this is getting more and more difficult, and the writer confesses to an increasing urge to scream at self-absorbed whiners to stop trivialising the very real pain of victims of cruelty, discrimination and injustice by comparing it to whatever self-proclaimed ‘vulnerability’ the whiner in question abuses to get the attention s/he craves.